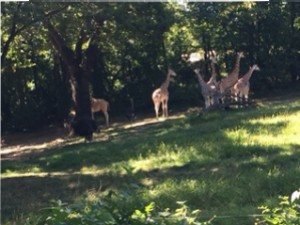 We decided to take our little one to the zoo for his first time. He is 7 months old so our expectations for how much attention he would be paying to all of the animals were pretty low. I did expect him to be excited to see the giraffes or monkeys because he loves them but he wasn’t interested in the animals at all. He was captivated and fascinated by the trees and flowers. It was entertaining to watch him look at everything and just take it all in (well everything but the animals anyway).

We packed everything we could, got both kids in the car, and were on our way. We left the house at around 9 and made great time and arrived at the zoo by 10:30. The Bronx Zoo wasn’t jam-packed with people yet, which was great. FYI the Bronx Zoo general admission is free on Wednesdays otherwise paying at the door: Adult admission is $33.95; Children 3-12 is $23.95; Senior 65 and older is $28.95; and Children 2 and under is Free.

I had a plan all set on what we would see and where we would go to navigate this Zoo to try and see as much as possible. We would park in Asia parking and head to the giraffes and then the lions. We would have lunch and then check out the polar bears and tigers. Then head over to the sea lions and penguins and finish off at the souvenir store. This was all great and dandy until we got there and pictures needed to be taken, our little guy wanted a bottle, more people started to come and of course we didn’t have a map. Womp womp. We did the best we could and got a map as soon as we found someone who worked there. Then we decided to just go with the flow and see as much as we could based on where we were and tried to head in a general direction with the final destination being the souvenir store.

We had a nice packed lunch outside the gardens. I had decided to pack a lunch because food at the zoo is expensive and I wanted to use as much of our spending money on souvenirs and anything that came up. I enjoyed seeing the giraffes, penguins, sea lions, tigers, and monkeys. It was a nice sunny breezy day which made the four hour trek around the zoo bearable. By the time we got to the souvenir store my body was aching. I had carried my little one in a baby carrier for half the time and while it does help a lot, his weight had taken its toll on me along with the hills and the walking everywhere. 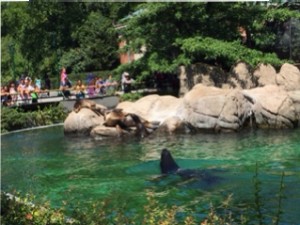 My favorite park of this trip was at the souvenir store. We looked everywhere trying to find him the perfect giraffe stuffed animal because he loves to sleep with his sleepytime giraffe. He was happy to see the toy and held it while we walked around. I then came across a monkey stuffed animal and showed it to him. He immediately grabbed it and wanted to play with it and bite it. At this point he was holding both toys. His dad took both and held them out to him to see which he would choose, if any. He quickly reached for the monkey time and time again. His dad switched the toys to different hands to see if that changed anything. Once again he reached for and grabbed the monkey with such excitement on his face. The monkey was the one. My little guy picked out his very own stuffed animal and it was such a precious moment. We waited for his sister to pick her key chain and the whole time he held on to the monkey. 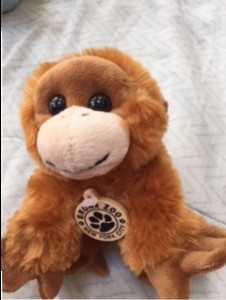 When we got home, he continued to play with the monkey and now whenever given a choice of a toy he always goes for the monkey first. The small (and I mean small lol) stuffed monkey $8.50, the joy it brought my little guy PRICELESS. 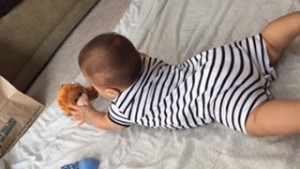 That was our weekend fun. Hope you had a great weekend. XO