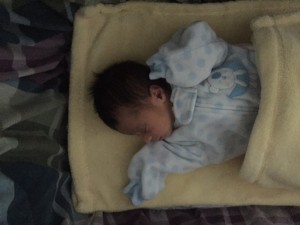 With my little guy turning 8 months old on the 18th, it has me thinking about how quickly time is flying by. I remember the first month of his life being the hardest for me. I don’t mean that in the sense of it actually being more difficult but that it was hardest for me because it was all new to me. I am one of those very organized planners who likes to be in control most of the time. When my little guy was born, I was the happiest I have ever been and I was also the most terrified I have ever been. I was for the first time responsible for another life (other than fur babies), and the thought that I might mess up or that something could go wrong terrified me.

My little guy was born at 6lbs 1oz, 18 1/2 inches. I remember just staring at him as he slept and constantly checking his breathing. He looked so innocent and so fragile like if I held him wrong or wasn’t super careful I’d break him. That’s how I acted for the first month. I was hyper aware, hyper sensitive, and hyper worried about everything that had anything to do with him. I think I pretty much held him or was attached to him in some way the entire first month. For the first couple of weeks I don’t think I even left the bedroom for anything when I was home alone with him. I was breastfeeding (almost 8 months old now and still going strong) and with him eating every two hours around the clock I was always holding him.

Breastfeeding was a major struggle at first with me wanting to give up a few times but I made the effort to continue because it was something I was able to do and something I had really wanted to do. I know it’s not for everyone and believe me before he was born I didn’t think I would be breastfeeding him so I fully understand that. It is a very personal choice that a mom must make and decide what’s best for her and her baby. For me it was difficult because once I committed to breastfeeding, due to our circumstances at the hospital, the hospital staff introduced a pacifier and bottle to my little guy (which isn’t recommended for the first month) and it made it way harder for him to latch properly. There were days where I just fought through the pain so that he could eat. I even supplemented with formula a few times just to give my breasts a small break. But it got better. He learned to latch properly and things became so much easier. I learned to look for cues of early hunger so that I could offer him breast milk before he got to the point of frustration due to hunger. We both learned together and it formed a wonderful bond. Now breastfeeding is pretty much seamless and effortless except when he is teething. Then with the fussing and gum pain it becomes a little more difficult but nowhere near what it was before. For anyone going through it, there is a light at the end of the tunnel and please feel free to comment if you have any questions or want to know anything that helped me.

I spent some much of my time worrying about SIDS, whether or not he was eating enough, if he was going to the bathroom enough, if it was diarrhea or normal, if he had a stuffy nose or if he had a cold, and the list goes on. Once I was able to get into a routine and get to know him better and his cues, it became easier because I became more confident and comfortable in my ability to properly care for him and his needs. It’s crazy how no matter how many babies I’ve watched in the past, when it came to watching my little guy, I felt like it was the very first time I had ever done anything involving a baby. A simple diaper change had me anxious. I think I was so worried about possibly doing something wrong that I was so hard on myself. What I learned is that it’s all a process and every parent gets there. I learned to enjoy all the moments and cherish the time I was spending with him. Every parent worries, every parent wants to do what’s best for their child.Once I got past my fears, life became more normal. I got back into my routine (as best as you can with a baby), the stress decreased tremendously, and everything got easier.

Now at 7 months old he is a chubby, handsome, stubborn, determined, and wonderful little guy. Whether it be crawling all over, reaching for phones and remotes, or taking off his diaper, he sure keeps me on my toes. I wouldn’t have it any other way. I can say without a doubt that he is the one thing in my life I am most proud of. My little guy. My everything. Hope you all are having a good week. XO 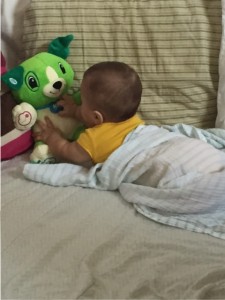