My little guy turned 7 months old on the 18th and I still can’t believe how quickly time is passing by. He is now rolling all over and trying to crawl while biting everything in sight. Due to his newfound need for freedom and exploration, I have set up a “fort” for him with all of his favorite toys; as well as mine.

1. Scout by Leap Frog- This green dog is not only adorable but educational and programmable. It is a soft plush toy with a hard plastic light up button where his name tag is. On his right paw he has a bouncing ball design where when you push it, he states different things he likes, sounds, animals, etc. On his left front paw he has a music symbol where he plays different songs such as the itsy bitsy spider and personalized songs.  His bottom right paw has a moon button where he plays 5 minutes of bedtime music. His right bottom paw has the power button where he says hello “name” and to power off. You can program personalized information such as favorite food, color, animal and your name. It is currently one of my little guy’s favorite toys. 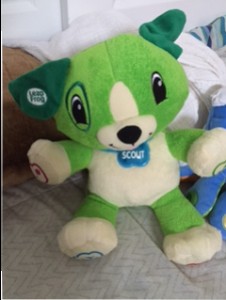 2. Octopus by Baby Einstein- This toy plays music and is a plush toy. The octopus has a different color on each tentacle and it states them in english, spanish, or french when you push each tentacle. When you push his head he plays a few different songs. This toy used to scare my little guy when he was 3 months old but he loves it now. He really enjoys the music while he chews on the octopus’ tentacles. 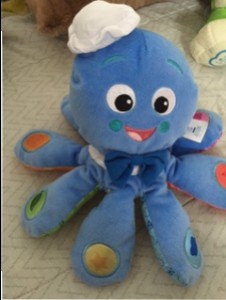 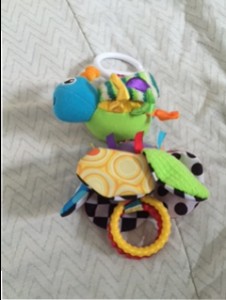 4. Security blanket monkey by Baby Starters- This is a soft plush monkey with its midsection being a small blanket. Its head is a rattle. My little guy loves this toy when he is sleepy and just wants to hold on to something. It isn’t too stimulating so it doesn’t bother him when he is sleepy. 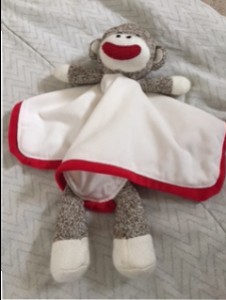 5. Giraffe by Fisher Price- This toy I have mentioned before. It is a plush giraffe that has a midsection that lights up and plays bedtime music. After a few minutes the light dims until it eventually turns off altogether. You can turn it off by pressing and holding its midsection. This is my little guy’s all time favorite sleep time toy. It relaxes and soothes him. He likes to stare at the light as well as chewing on the giraffe. (He’s currently teething so he pretty much chews on anything and everything). 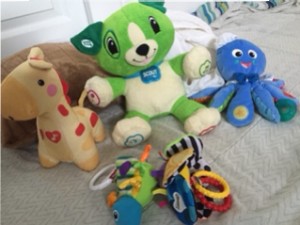 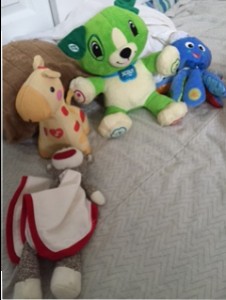 Let me know in the comments below what your babies favorite toys are! XO