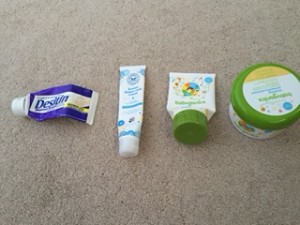 As a cautious mom I am always looking for the safest product for my little guy. When it comes to preventing diaper rash, I was on a mission. It killed me to see his little behind red or bumpy when I knew it could be prevented. I tried several different creams but none of them truly prevented his diaper rashes until I found what I would like to call my Holy Grail.

First I would like to go through the ones that struck out and why. I’m going based solely on my experience and what has worked for my little guy. Hopefully it could do the same for your little ones. Let me preface this by stating that my little guy is now almost 7 months old and has only had a handful of diaper rashes. The minute I noticed something was not working, I moved on to something else.

DESITIN– The first diaper rash cream I tried on my little guy was Desitin. Not a fan. So many reasons why. Let’s see, it’s thick and sticky and sooo hard to take off of your fingers, baby’s behind or anything you happen to unfortunately come in contact with. I also did not like the extremely strong scent it has. I don’t know if it is just me but I could smell it through the diaper for a while. But worst of all, it made my little guy’s skin feel dry and rough but did not prevent him from getting little bumps or redness. Also, once he had a diaper rash, applying Desitin did not make it go away. I had to have him without a diaper as much as possible and frequently change his diaper until the rash was gone.

BALMEX– Next, Balmex. Fail. I must say it is not as scented or sticky as Desitin which was a huge plus. However, it did not last very long and did not prevent diaper rashes either.

BUTT PASTE– This does not have a bad or strong scent and has a nice creamy light consistency. It does not stay on very long. I have tried samples of it and while I thought it was not bad, I cannot say with confidence that it prevents or helps get rid of diaper rashes.

Diaper Rash Cream by Honest Company– Now this cream I really wanted to love but it came up just short of what I wanted. It has great ingredients and is light in consistency with no strong odor. It kept his behind moisturized and prevented diaper rashes for the most part but once he got a diaper rash it did not help it go away. And he still did get diaper rashes with this cream although not often.

Healing Balm by Honest Company– Now this takes second place. I must say the ingredients are great, no strong odor, moisturizes and lasts. It kept most diaper rashes at bay, and if he did get any, it did shorten the amount of time that he had it for. I would have been happy with this, but I had finished it all and Target was all out of it, leaving me to find something else to use. That’s when I came across the Holy Grail of diaper creams.

I was at Babies R Us when I saw it and I figured that since the Honest Company Healing Balm was so good that I should try this. So glad I did.

Babyganics Soothing Protective Ointment– is the BEST. It has great ingredients, no strong odor, moisturizes, lasts, and is lighter and creamier consistency than the Honest one so you can use less each time. I put this on my little guy each time I change his diaper and he has not gotten ANY diaper rashes while using it. If we are out and I don’t have it with me (I bought the big container which doesn’t work well on the go) his bottom sometimes gets a little irritated but then I apply it and within a few hours he is good as new. I also use this on any of his little crevices (he’s my little chubby munchkin) or any irritated area and it prevents chaffing and redness. AMAZING PRODUCT. I love it so much.

I hope this reviews helps you. Let me know what you think or if you have any Holy Grail diaper rash creams or ointments. XO