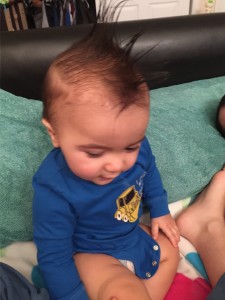 I can’t believe that my little boy is already 14 months old. It went by so fast. I can still remember the first month like it was yesterday. He was so little and he’s now such a big boy. I’m so amazed by how quickly he learns and absorbs everything around him. He tries to help me change his diaper, he wants to eat foods by himself using a spoon and holding the bowl, and he is feverishly trying to walk. It’s so incredible to witness him become independent so quickly. Of course it doesn’t go as he plans it. Life has definitely gotten messy. I spend more time cleaning him than anything else but he just loves trying things himself and I think it’s great. What I can honestly say I am not so fond of are his very loud and demanding temper tantrums. It’s almost as if the minute he turned one, a switch went off in him, and he all of a sudden wanted everything his way and he will let anyone who disagrees or tries to stop him hear him ROAR. Lol. He is adorable even then but I have to say my ears could do without such noise. He gets so into it too. He literally throws himself onto the floor and flails while yelling and screaming. The funny part is that he will pause to see if he has my attention and then continue on. Having a toddler is nothing short of a roller coaster but I wouldn’t change it for anything. It’s so incredible.

Thought I would share a little of my experience with you guys. Leave me a comment down below about your experiences. I would love to read about them! XO